The Wright kind of story

Axopar 37 Sun Top owner review from WAWords by Jasmyn Wright – Written by Marnie EbelingWe are here to shed a happy story of debatably our most passionate Axopar customers ever.Whether you are scrolling through Jasmyn’s instagram feed or have a few minutes of conversation with her you immediately know that this is someone who truly loves and is so so proud of her boat.Hopping on the phone to Jasmyn within seconds I could feel the excitement through the phone, I didn’t have to ask questions, she could talk to me about me how thrilled they are with their purchase for hours I’m sure.The first things to come out of her mouth were, “We LOVE our boat, it’s been one of the best things that’s happened to us.”

It all started over 2 years ago when Peter (Jasmyn’s husband) began searching for a boat to take on the challenging offshore conditions in Western Australia. The couple wanted something that was not only comfortable for getting them to and from the islands off the coast of Perth, but also something they could take their family out on and spend nights aboard.When Peter first discovered Axopar, he was quite honestly unsure it would be able to take on the rough swell that WA often saw but he had done A LOT of research at this point and decided to fly over to Sydney for a test drive. Peter Hrones, Eyachts MD, took Peter out off the coast of Pittwater and from that experience he knew this was not just any other boat. He was extremely impressed with the Axopars supreme handling and could tell that this hull was something unique, it really went above expectations.A few months later, I met the Wrights at Perth Boat Show and we invited them out on another owners 37 for a test drive and a trip out to Rottnest Island.It was a pretty rough day, it was raining and the swell was certainly unsettled, but as we sat in the back of the 37 Sun Top I saw Jasmyns face light up. As the hull deflected the waves she could not believe how comfortable and dry we were, even at such fast speeds. I remember her saying over and over “Wow Peter you made such a great decision, I am so pleased.”“The way the hull is designed you just don’t get wet, I am also so happy we got the open version, I love that we can just take in all the fresh air.” 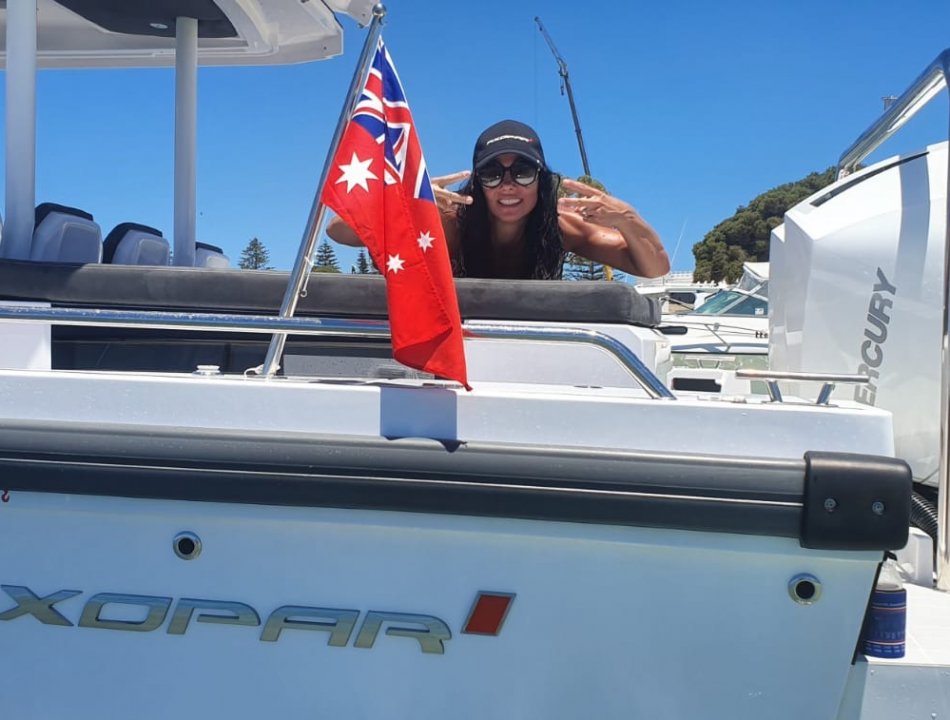 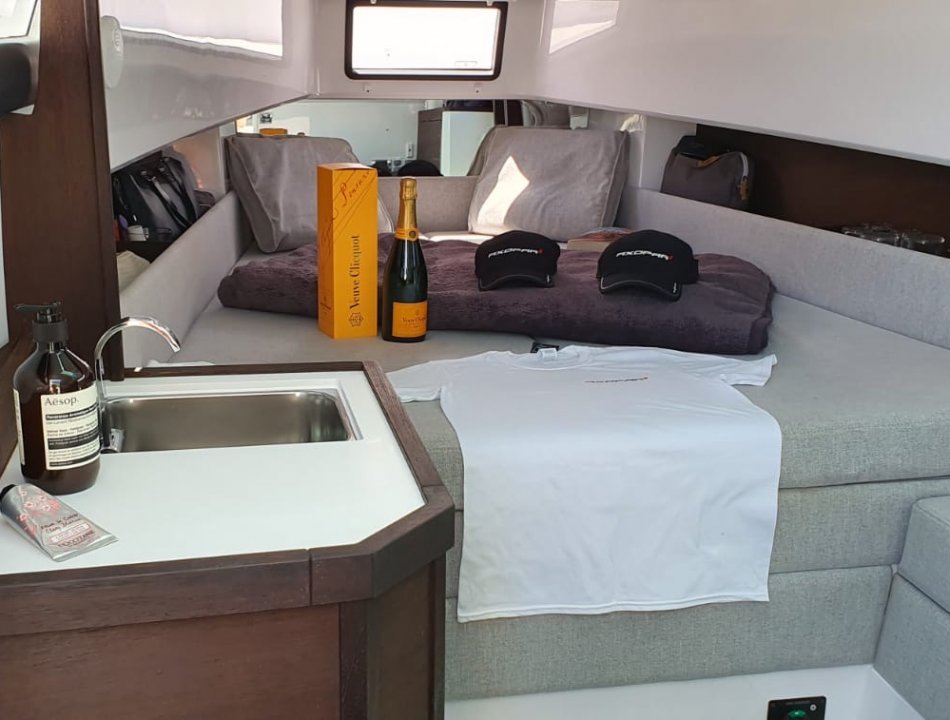 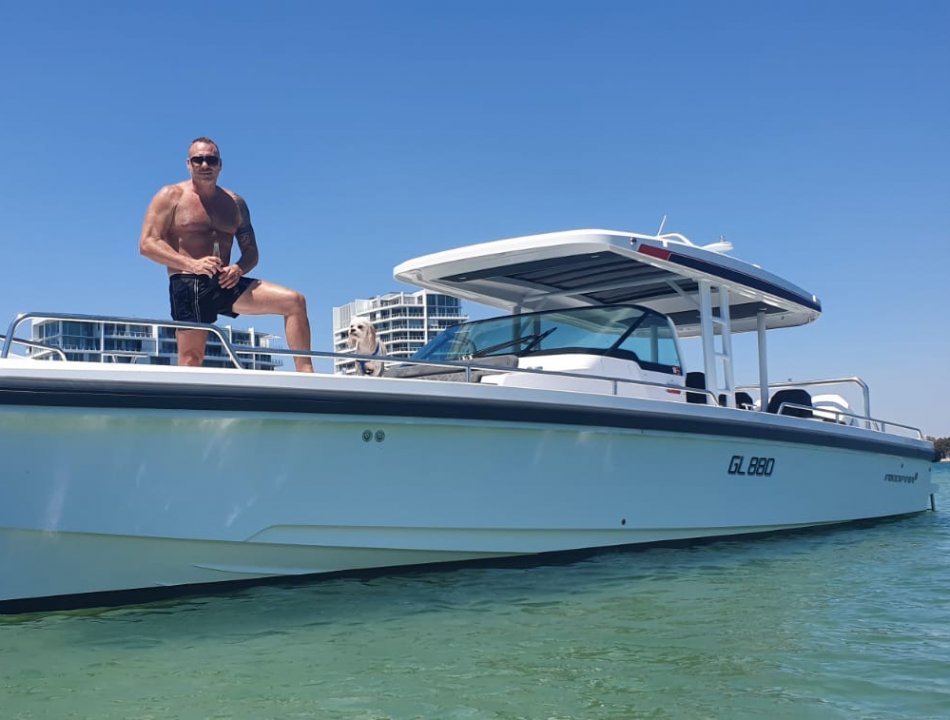 The Wrights received their boat soon after in early October, just in time for summer and since then have been non-stop boating and use it all the time.Some key things Jasmyn loves about the Axopar (aside from the handling and speed) is how versatile and functional it is.She says they would happily spend 4 nights onboard, “I simply shower off the back and put a hair mask in, sometimes we fall asleep on the sunbed and then take ourselves into the cabin,” she says.They opted for the aft cabin and Jasmyn really is so pleased they chose this over the wet bar, this is where they prefer to sleep but also gives them the option to have guests and family stay too.They bring a large esky for drinks which fits SO much alcohol, but the two fridges they have she says, “really are so much bigger than you would think, I can fit so much in there”.“I simply prep everything in containers like cheese, biscuits, fruit, milk and cereal, prawns, cut up chicken and tomato so we can make rolls, we do also have a butane gas burner. We also like going into Rottnest Pub or to other places on the island.”In general she raves about how much storage there is on board, under the deck and in the cabin for plates, cutlery, sunscreen, ropes, fenders, really everything you need for cruising.

The other thing Jasmyn is so pleased with is just how much they can do on their boat. Because of the short draft they can take their boat into many places other people can’t.Not only do they enjoy backing in the Axopar on the shore of Thomas Bay and being able to step off at ankle depth but they can go to Heron Bay on Garden Island which is a Naval base. This is a massive bonus, not many boats get to experience the surreal beauty, the seals, the reefs and incredible snorkelling because it is so shallow.The Wrights also have a holiday home down the coast in Mandurah. It sits on the river and not many 37ft boats are seen down there because it can get as shallow as 1.8 metres.Typically, they will take the Axopar and their jet skis down with them and leave them on their dock. Jasmyn excitedly showed me the upgrades they had just made to the dock so the Axopar would fit, stating that, “There isn’t a boat that goes past without staring and saying how cool it looks. It really is so sexy, versatile and head turning.”She also told me a story of how they were driving out of the river with the Axopar and two jet skis when they were spotted by a police boat. As they left the 12 knot zone and sped up, the police boat decided to chase them, just to see if they could catch up if need be. They probably had never seen the Axopar before and could tell it was going to be quick.“Our Jet Skis are both 300hp but they can’t keep up with the Axopar that has twin 300s, with antifoul on we have comfortably gotten to 42kts on the Axopar.” 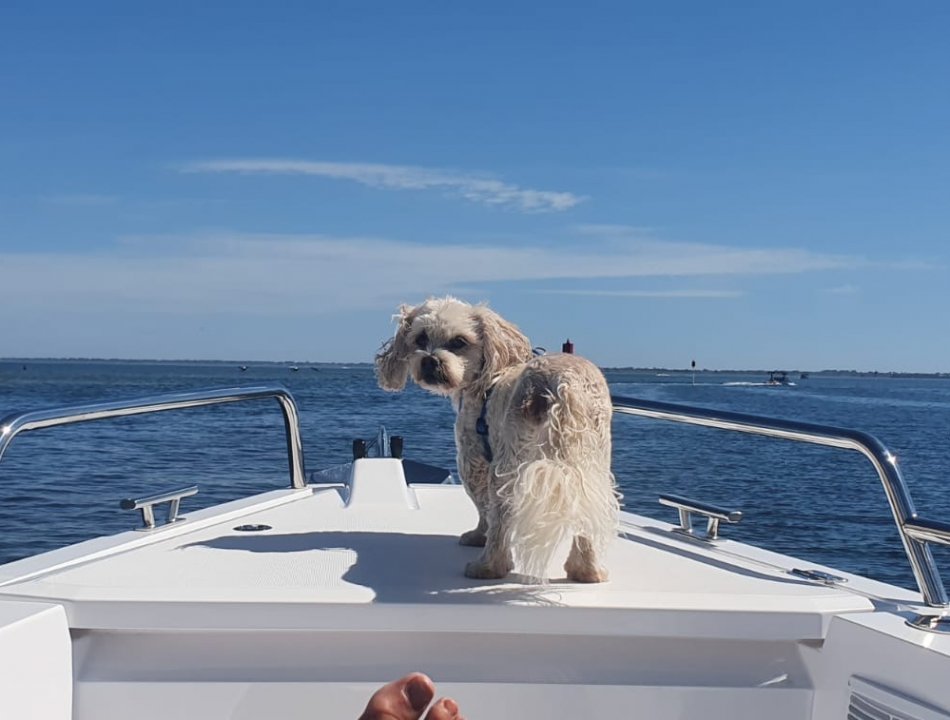 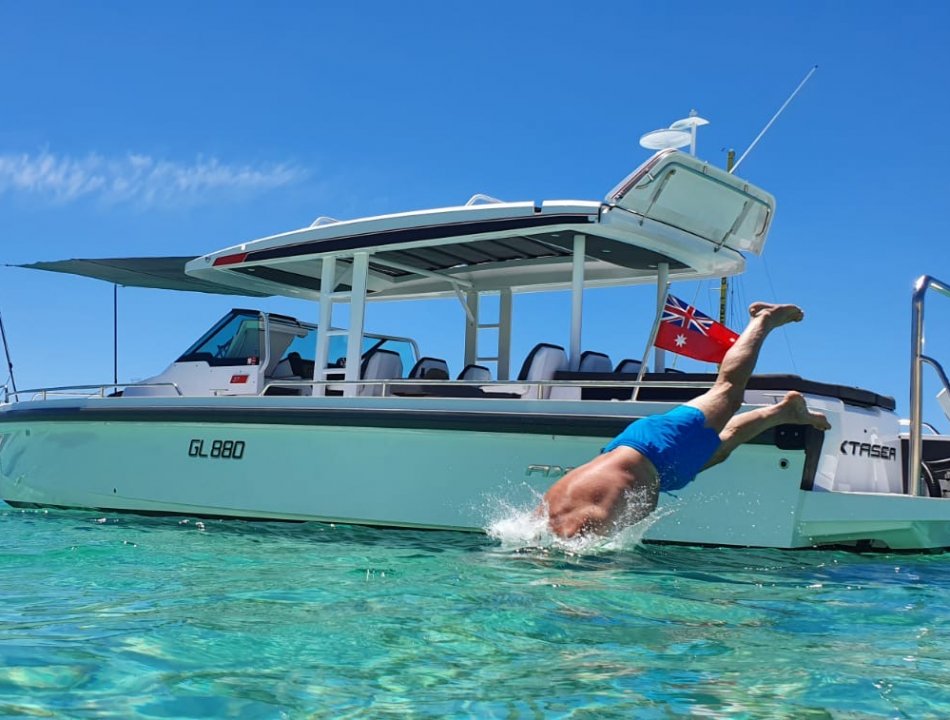 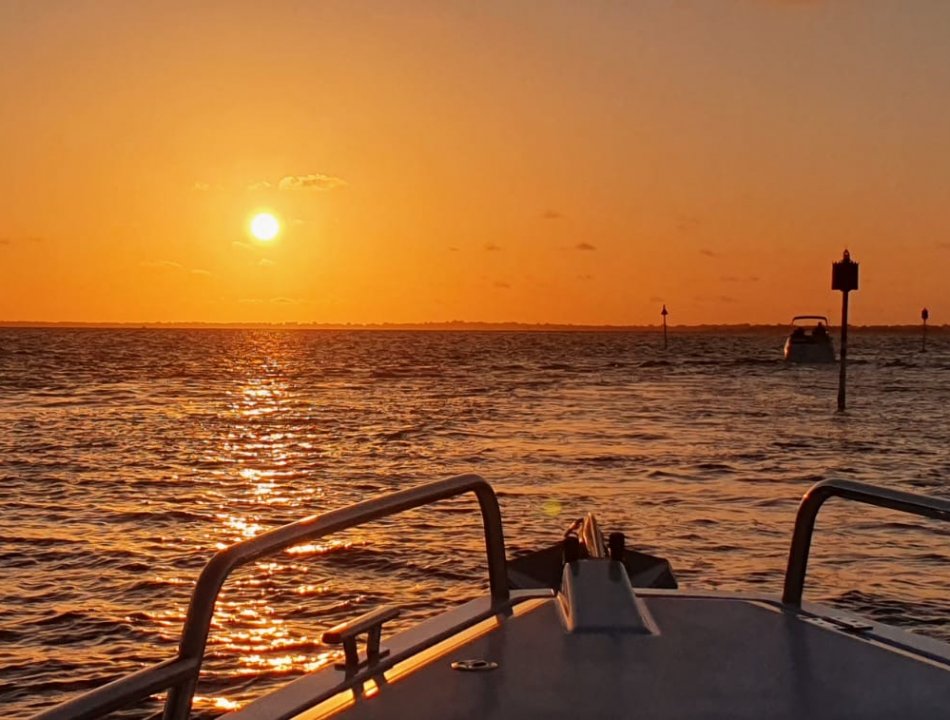 Some other highlights have been the social aspect, rafting up or having many people onboard at once.For Australia day they rafted up with their friends and had 12 people onboard, but felt like everyone was comfortable and they could’ve had more.Everyone spread out over the two sunbeds and table area playing games and everyone was wearing red shorts.They also often take it out after working, picking up the kids in Elizabeth Quay, everyone around wants to have a look on board.Jasmyn says that she loves driving the boat herself, it is so easy and she loves the bow thrusters, they are a huge bonus.They have also done a few cool things after market, including adding a bar on the back for waterskiing and wakeboarding and a 12V TV antenna to watch TV when they stay over night. They also added a cool red stripe to fit the Axopar logo and named the boat Axtasea.“We have communication with Eyachts and Brendon here in WA so we know if we ever needed anything we will be looked after, we really, really love our boat.” 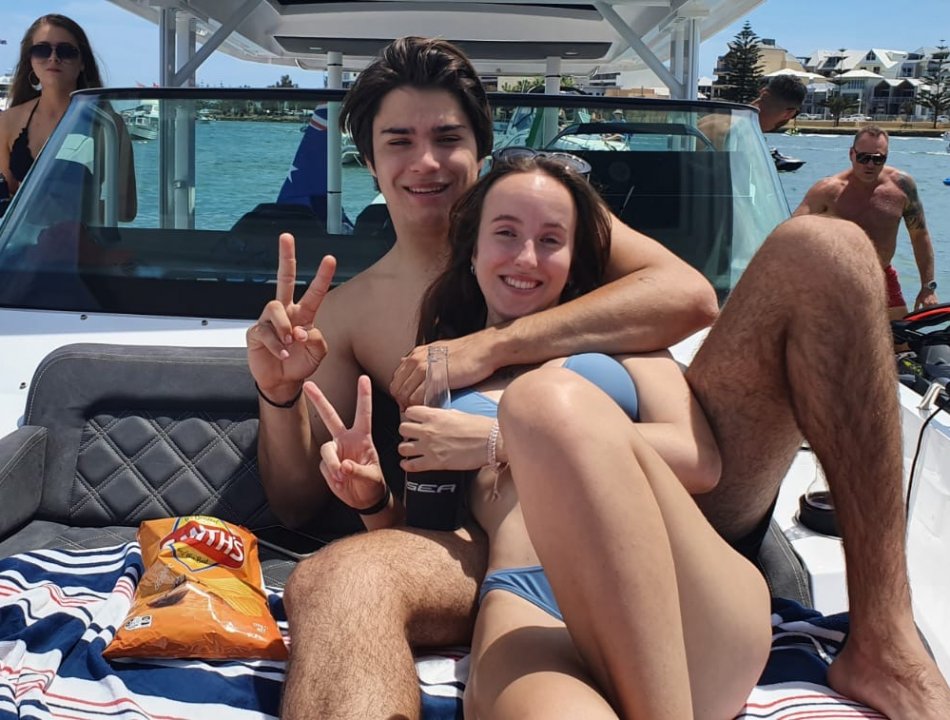 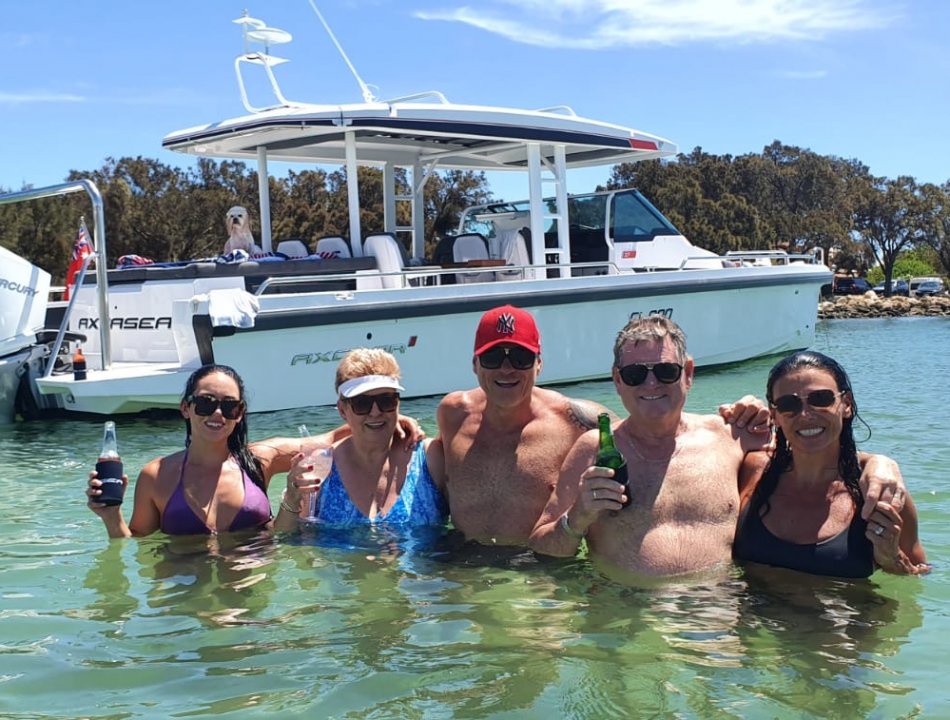 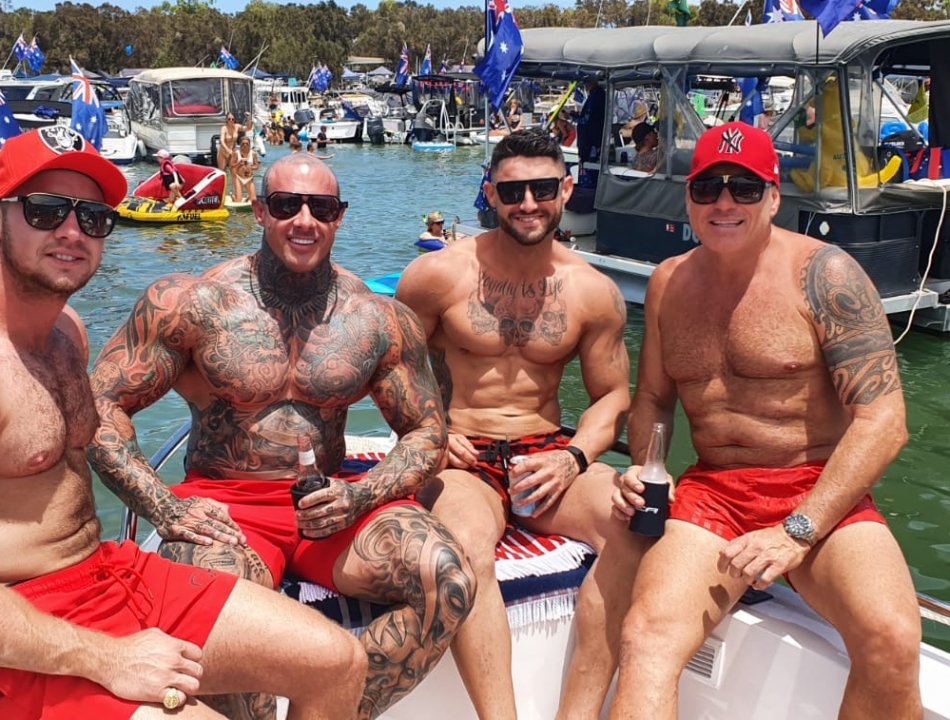 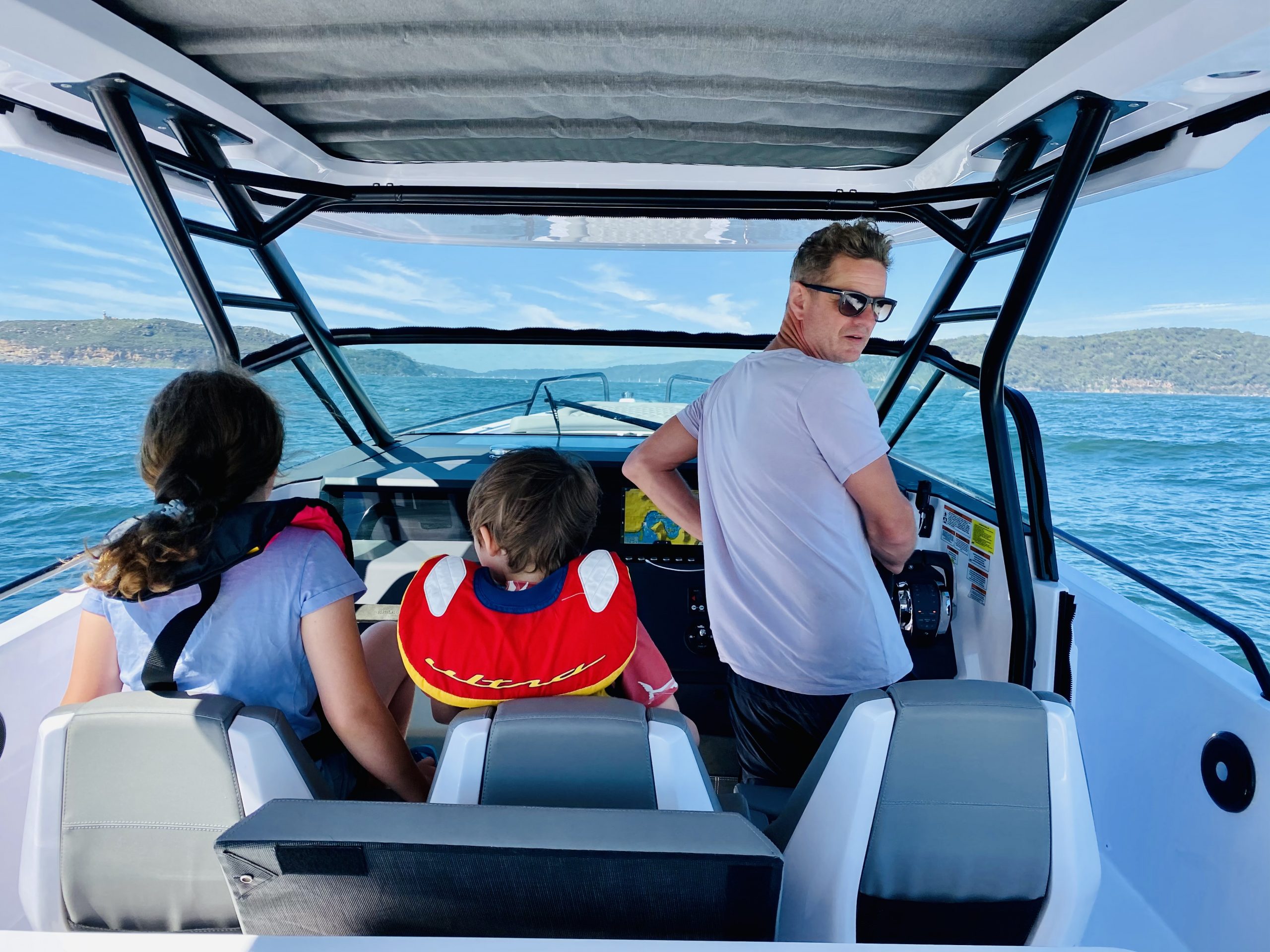 Is the Axopar 37 Diamond Quality?

The Diamonds love their Axopar’s, “Speed, comfort and amazing flexible fun and ability for overnighters… We love hanging out having fun on the water. Zooming out through the heads, but the adventure doesn’t stop there,” says Bec Diamond.
“The overall purchase, delivery, and handover experience with the team at Eyachts was nothing short of brilliant. 10/10.”

END_OF_DOCUMENT_TOKEN_TO_BE_REPLACED

“I love the speed, the stability and, being an accountant, the fuel economy. I have zipped all over Pittwater at 30 knots sipping only 80 litres an hour. Show me another 37 ft boat that gets anywhere near that!!!

I have always loved the styling on the Axopar range, but it really was the new hull design on the 37 revolution that had me push the buy button,” said Andrew.

END_OF_DOCUMENT_TOKEN_TO_BE_REPLACED 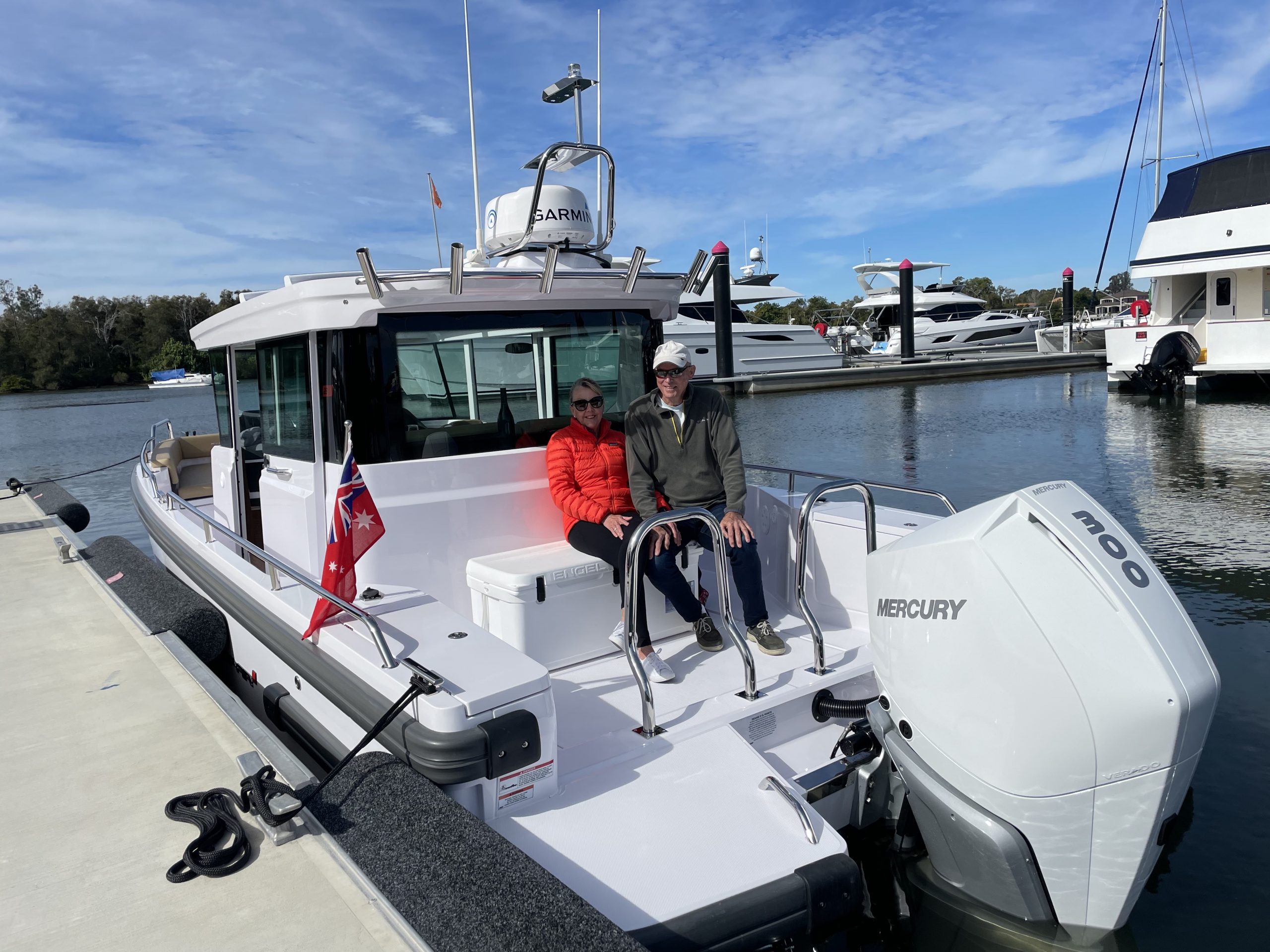 Previously owning a Greenline 40 Hybrid for 8 years the Flemings were looking to downsize and found the perfect fit, the Axopar 28 Cabin.

Jon and Anne are already in love with their Axopar, it fulfils all their needs with the enclosed helm and how quiet and peaceful it is with the doors closed and retractable roof open. Jon talked about how well it rode at 25knots and the ease of steering with the 300hp Mercury Outboard.