The Axopar 37 range wins the prestigious “Motor Boat of The Year 2017” title!

The Axopar 37 was awarded “Motor Boat of The Year 2017” in the category Sportsboats and RIBs in the 2017 Motor Boat Awards, considered the Oscars of the motor boat world!A panel of five highly experienced marine journalists were responsible for sea-trialling all 47 finalists before selecting the winning craft. The international nature of the event was reflected with winners from Scandinavia, Netherlands, Italy and the UK.

Axopar awards – THE JURY’S COMMENTS ON THE AXOPAR 37 RANGE:“A boat with dazzling performance, effortless seakeeping and cutting edge style with a choice of deck layouts at a price that never ceases to amaze us.”

MORE INSIGHT INTO WHAT THEY LIKED ABOUT THE BOATS:

”When we tested the original Axopar 28 back in 2015, we wondered whether the Finnish yard would be able to better itself. Well, we need wonder no more because the 37 is an utter triumph. Built with a similar ethos to the 28, the increased length means even more impressive deck space and crucially, a comfortable forward cabin with a toilet.It’s an incredibly versatile boat with three different deck options (Sun-Top, T-Top and Cabin) and the choice between an open aft deck, a wet-bar or the clever twin cabin that we first saw on the 28.On test in the August 2016 issue, we remarked on how brilliantly the 37 handled the messy chop and rolling swells of our sea trial. It’s a boat that feels like it’s not even trying in rough weather, skipping from wave to wave with refined enthusiasm thanks to its razor-sharp twin-stepped hull.

This is a big boat for outboard power but once behind the excellent helm station, it’s hard to imagine the 37 being propelled by anything else. The immediacy of the throttle response and the 50-knot top speed are what makes it so enchanting, though there are smaller engine options available to suit all tastes.Like its smaller siblings, it’s a smart balance of value for money and classy finishing with top-class components, quality upholstery and intelligent storage solutions to make the very most of the space available.”

COMMENTS FROM THE JURY:Axopar – Boat sales and International dealership growth.
Since launching its first range of boats in 2014, Finland’s Axopar Boats has achieved impressive global sales growth, The Jury were particularly taken by the drive and ambition of the company and the fact that it has quickly created a large yet credible network expansion which has helped it build a strong global brand in a very short time period.

Axopar 28 – European Powerboat of the Year 2016 in the category up to 35 feet!revPowerboat2016
Each year Europe’s best in the boating industry are rewarded with the “Oscars of watersports“: The international “European Powerboat of the Year” Awards. The title is highly acknowledged, and is awarded to the best five boats sold in Europe, in five different size categories. The Axopar 28 range won in the category – Up to 35 feet and the winners were announced at the Düsseldorf International Boat show in January 2016.The expert panel consists of editors-in-chief of

Europe’s top eight motorboat magazines – Bådnyt (Norway), BoatMag (Italy), Boote (Germany), Marina.ch (Switzerland), Motorboot (The Netherlands), Nautica y Yates (Spain), Neptune (France) and Yacht Revue (Austria). The jury nominated 24 new boats in five classes: up to 25 feet, up to 35 feet, up to 45 feet, over 45 feet and the Displacement class, where length is of no importance.Being nominated alone means that the yacht is one of the most promising new innovations for the upcoming water sports season 2016. All of the 25 boats that were nominated have undergone extensive tests.

The European Powerboat of the Year is the most thorough competition there is for production yachts. The criteria that the jury bases their evaluation on space between value for money, performance and innovation. The spirit is to award the models that carry on valuable features, regardless of the brand or the market diffusion.

Axopar awards – FROM THE JURY:

Unique concept
At the start of development of the Axopar 28, all preconceived ideas were called into question. “Each component was analysed in detail. The outcome was a unique modern design, outstanding handling, maximum safety, processing in conformity with standards and, thanks to industrial component production, a revolutionary price. Something new, something perfect has come out of it,” says the shipyard. The concept is indeed unique: a walk-around, a large area for socialising or a sunbathing pad at the bow.

Array of surprises
In the cabin version, the bench seat can be converted into a double bed, while in the version with the aft cabin there are two fixed berths. A separate wet cell is accessible from the forecastle and rounds off the array of surprises. The twin-stepped hull is said to ensure fantastic handling characteristics. Thanks to the broad walk-around and high railing, the boat’s occupants can feel secure at all times – and even at top speeds exceeding 45 kn. The customer can choose between single and double Mercury outboard engines up to 300 hp.

The Axopar 28 range wins the prestigious “Motor Boat of The Year 2016” title!

The Axopar 28 was awarded “Motor Boat of The Year 2016” in the category Sportsboats and RIBs in the 2016 Motor Boat Awards, considered the Oscars of the motor boat world!

All boats currently available for sale in the UK are eligible for a Motor Boat Award provided they were tested and published by Motor Boat & Yachting in the past twelve months. Boats are judged by a panel of experienced professionals with decisions based on sea trial experience of each vessel. On average, over 70 boats are tested each year and are considered for entry into eight main categories.

Axopar awards – THE JURY’S COMMENTS ON THE AXOPAR 28 RANGE:

“A boat that has it all; searing performance, a fantastic hull, brilliant deck spaces, somewhere to sleep and looks to die for.”

MORE INSIGHT INTO WHAT THEY LIKED ABOUT THE BOATS:

”When the Axopar 28 came out on top in our four-way test between it, the Draco 27 RS, Paragon 25 Ranger and XO 250 we knew we were on to something special. Not only did it have the best deck layout and smartest packaging but it was also, inexplicably, the cheapest of the four to buy.

The 28 covers a huge number of bases, partly down to the fact that it is available as an Open, T-top or hardcore Wheelhouse version and partly beacuse it is just so cleverly designed. Pluses include the aft sunpad, with access at either end to what is a surprisingly usable double berth that is just as useful as a large dry storage locker, and the way the helm area is sunken into the deck and protected by a tall, sturdy windscreen. It has a toilet and sink nestled away within the console and in that pointy bow the yard has found space for a table so you can picnic on board.

Then there is the ride, which is sublime thanks to that knife-like, twin-stepped, 22 degree deadrise at the transom hull, and the 40-knot performance from the single 250hp Mercury Verado.

It’s a dayboat, weekender, sportsboat, watersports machine and a fast point-to-pointer rolled into one.”

The awards were held in Berlin 26.11 with 15 maritime journalists from 14 different magazines in the jury with over 260 tested boats during 2015.

THE JURY’S COMMENTS ON THE AXOPAR 28 RANGE:

“This agile and sporty boat from Finnish inventors, built in Poland, is based on a very light weight twin stepped deep-V hull that provides notable seaworthiness and a fun and safe ride. The Axopar 28 is easily trailerable and designed for single outboard engines up to 350 HP. The boat is remarkable in the way that it is offered in five versions based on the same hull ranging from an open version to a fully enclosed walkaround with Daycruiser aft cabin.”

A boat is “Best for Fun”, according to the Best of Boats jury, if the boat is versatile for many kinds of watersports, adaptable to the needs of different crews and – of course – fun to drive with to experience nature, water and power equally.

Axopar awards- Axopar 28 AC Motorboat of the Year 2014 in Sweden!

AwardsMotorboat2014
With over 60 new motorboats tested during 2014 the Swedish magazine Vi Båtägare selected the Axopar 28 AC as the winner of the Motorboat of the Year 2014 title with the following statements:

“An adrenaline inducing hull and a great price makes Axopar 28 AC newcomer of the year and worthy of the title Motorboat of the Year 2014.”, “This year’s motorboat 2014 is a new brand from an experienced manufacturer. Axopar 28 AC takes the cabin boat to a new level with smart solutions and an amazing hull. The large sunroof provides an open feel in the cabin and the nights can be spent in the aft cabin. All at a competitive price.”

They also gave acclaim to the 28 AC for rethinking the daycruiser concept, the driving pleasure and the truly innovative design. 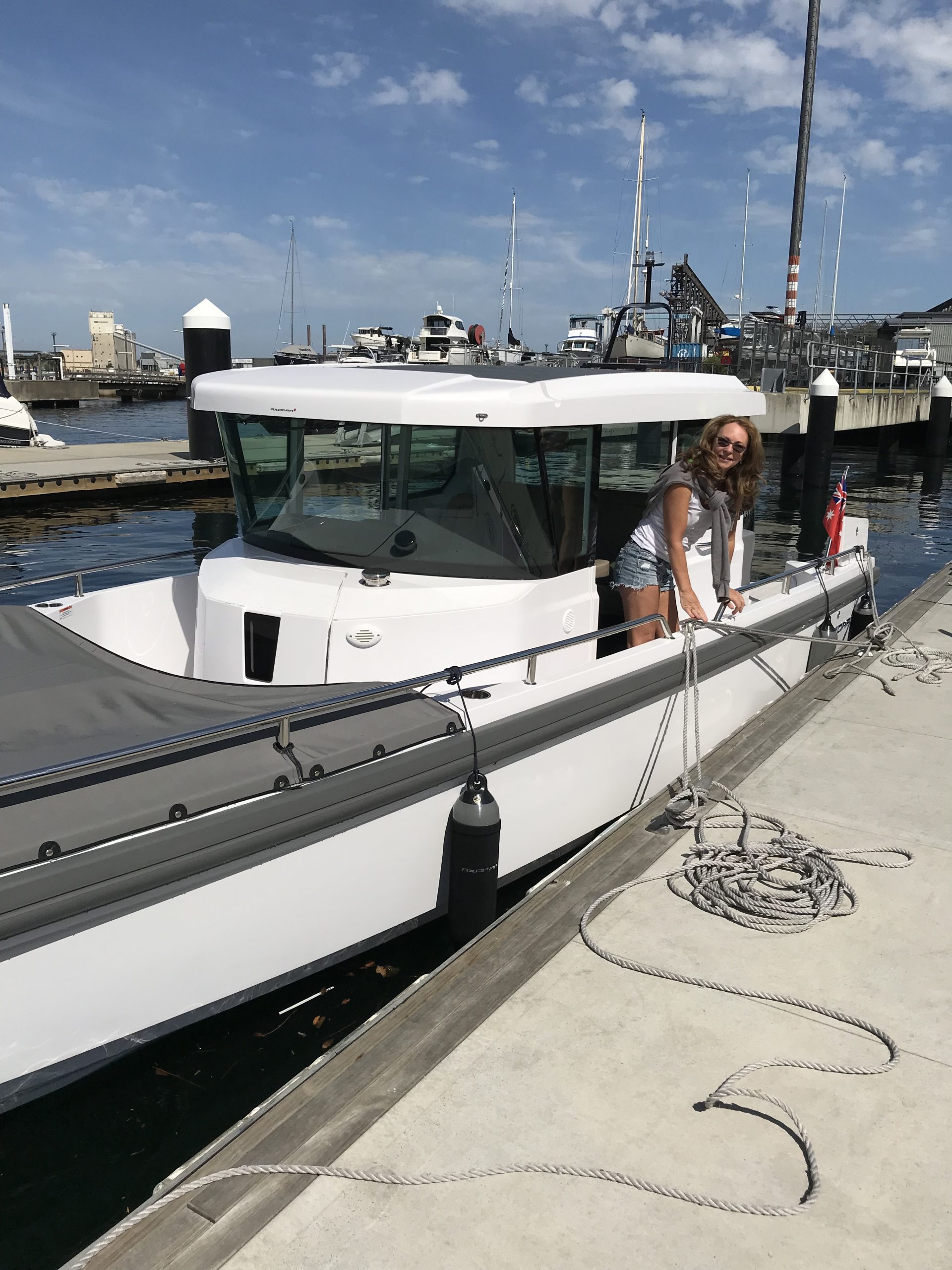 Georgie found the Axopar 28′ despite its length a well designed boat that could easily be skippered single-handedly, claiming “The Axopar is so easy to handle I can head out at any time in any condition.” Georgie refers to her Axopar as a “Sexy sports car. A convertible with opening doors and roof which allow full control of the amount of sun and wind one experiences.”

END_OF_DOCUMENT_TOKEN_TO_BE_REPLACED 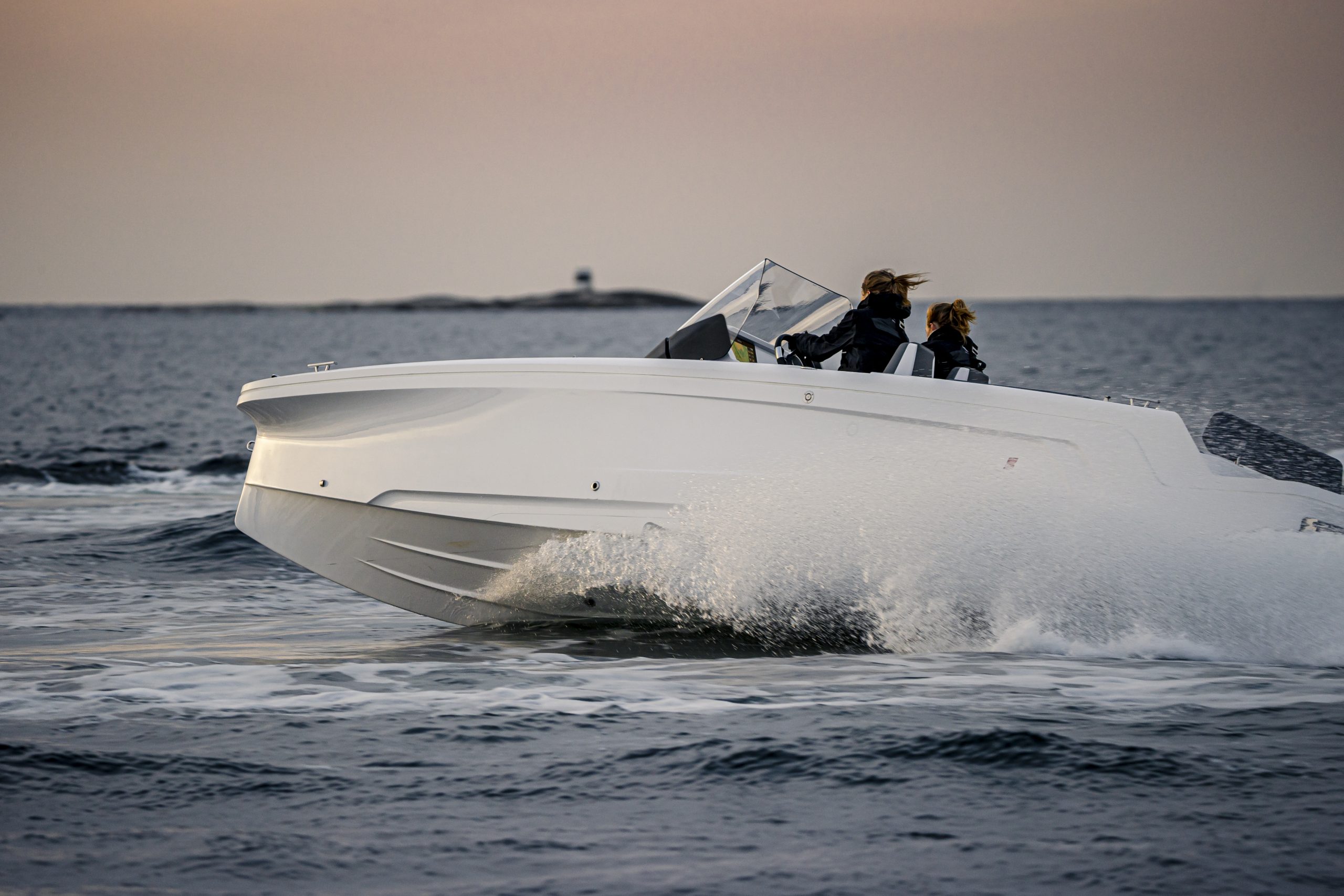 Axopar 22 On The Water

THE TEST DRIVEFollowing on from the official launch in Finland Jan-Erik and Tea talk through a range of options before taking them out on the water. It was Teas first time ever behind the wheel of a vessel larger than a Jetski which was super important for the Axopar...

END_OF_DOCUMENT_TOKEN_TO_BE_REPLACED 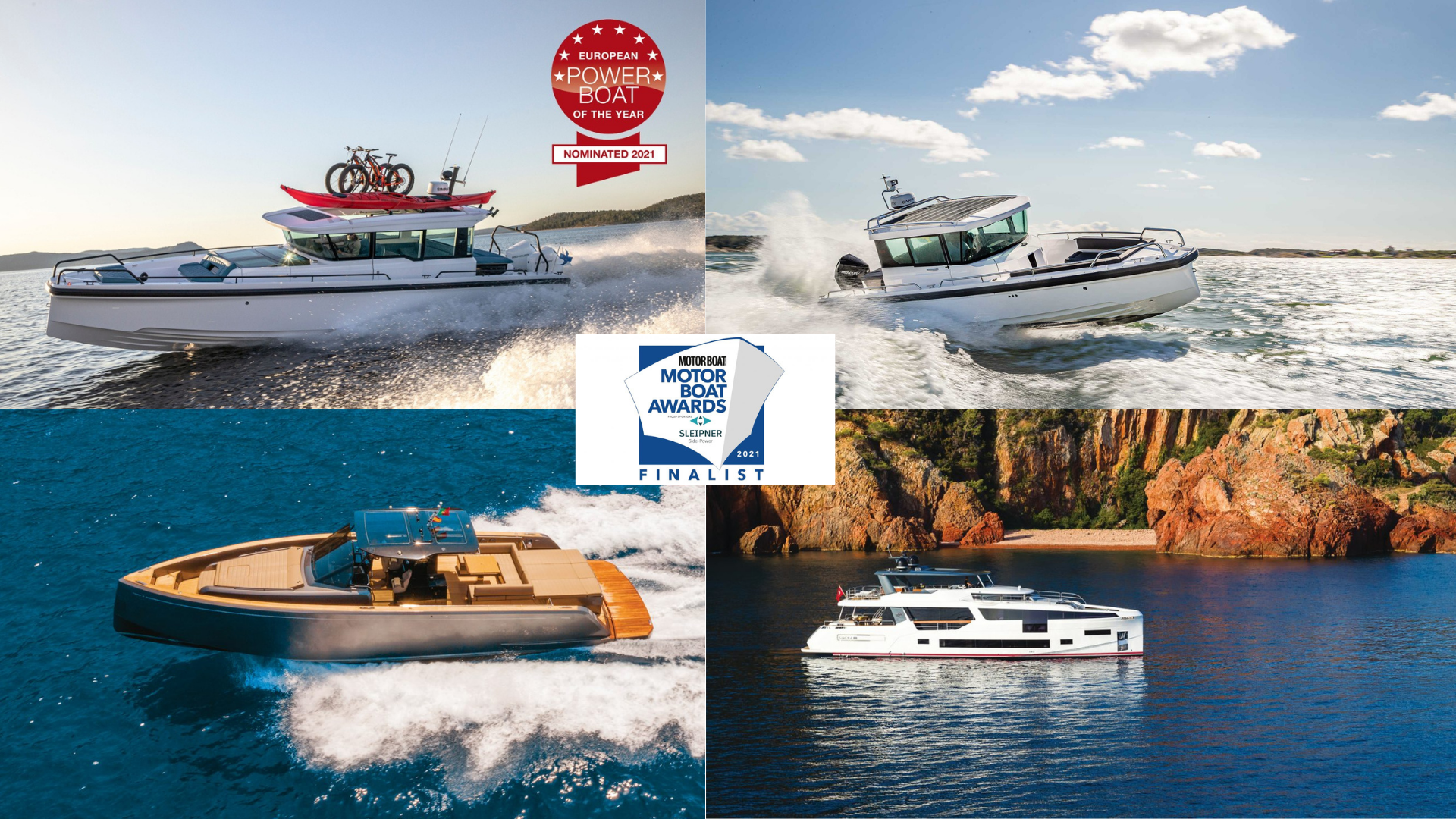 It is always a great feeling when the brands that we represent get nominated for awards and this year Axopar models were nominated for 3 separate awards including European Motor Boat of the Year and Boating Awards as well as Motorboat and Yachtings award along with the Pardo 50 and Sirena 88.